At a company with 70+ executive assistants (and growing fast!), it’s easy to feel like every day is Administrative Professionals Day. On a daily basis, we see just how critical Double assistants are to their executives, and the impact they have for companies they work with. Today we’re shining a spotlight on a few of the behind-the-scenes superheroes from our Double community.

Each of the Double assistants we talked to said their favorite form of recognition is a simple thank you for a job well done. So to our assistants, thank you! We appreciate all of the heart, determination, and enthusiasm that you bring to the Double community each and every day. 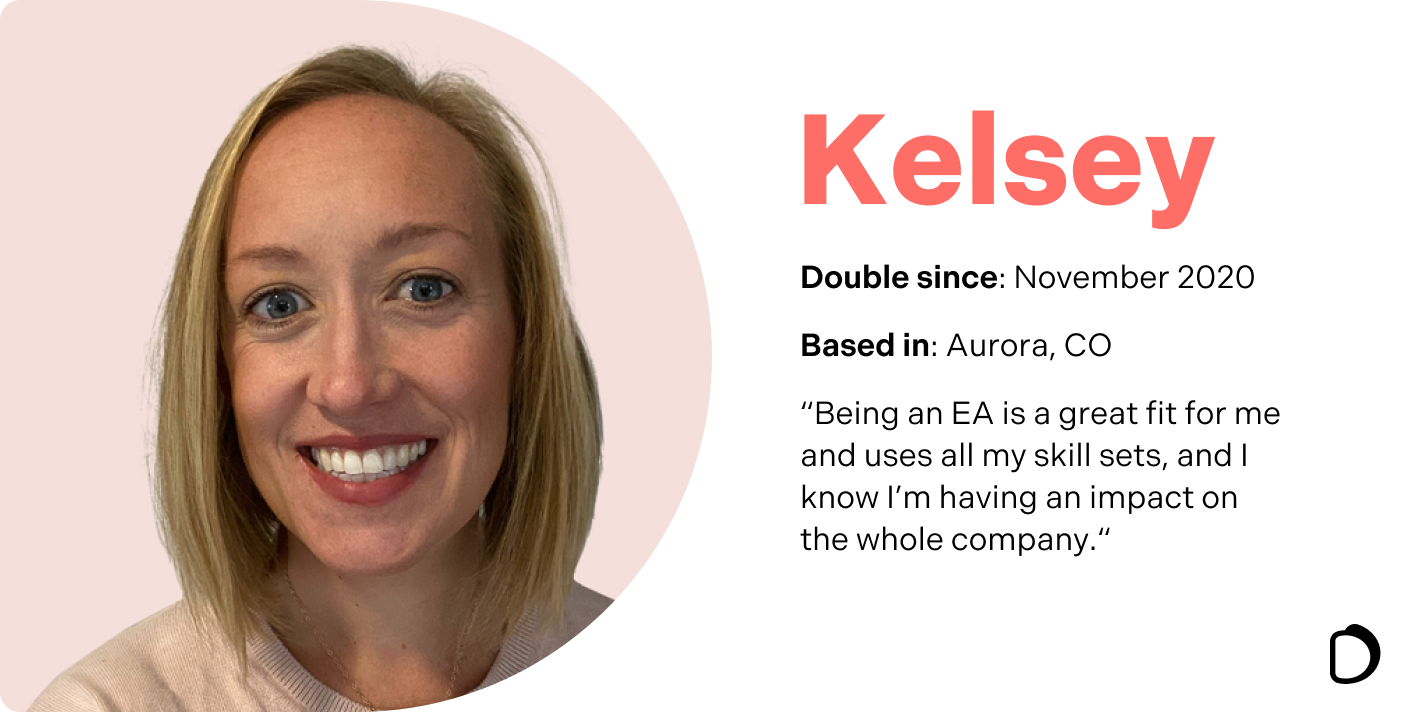 How I got started as an EA: I used to work as a director and led development efforts for nonprofits. When my son got sick, I needed a job where I wouldn’t have to take work home, so I became a receptionist. I learned so much about serving others in that role, and after a year I moved to an EA position at the company. Being an EA is a great fit for me and uses all my skill sets, and I know I’m having an impact on the whole company. It’s professional tetris all day long!

Why I joined Double: As an in-house EA, you’re a team of one and people don’t often think about how to engage EAs as part of the company. Being part of Double adds so much value to my personal and professional life. I feel so seen with the Double community. My husband says I seem so much happier since working with Double.

Biggest EA challenge I’ve solved: I started working with a new executive recently who had a backlog of tasks he thought were totally impossible to solve. Within two weeks, I had all of his backlog items done, including tracking down and buying a specific boat, buying a car out-of-state, getting insurance for his family members, and tackling some old traffic tickets.

Advice for other EAs: EAs should always see the value in their work and feel the value they’re providing through words or acknowledgement. If you’re not experiencing the value you provide, it’s not the right fit for you. Don’t fear making a change to find a more rewarding environment. 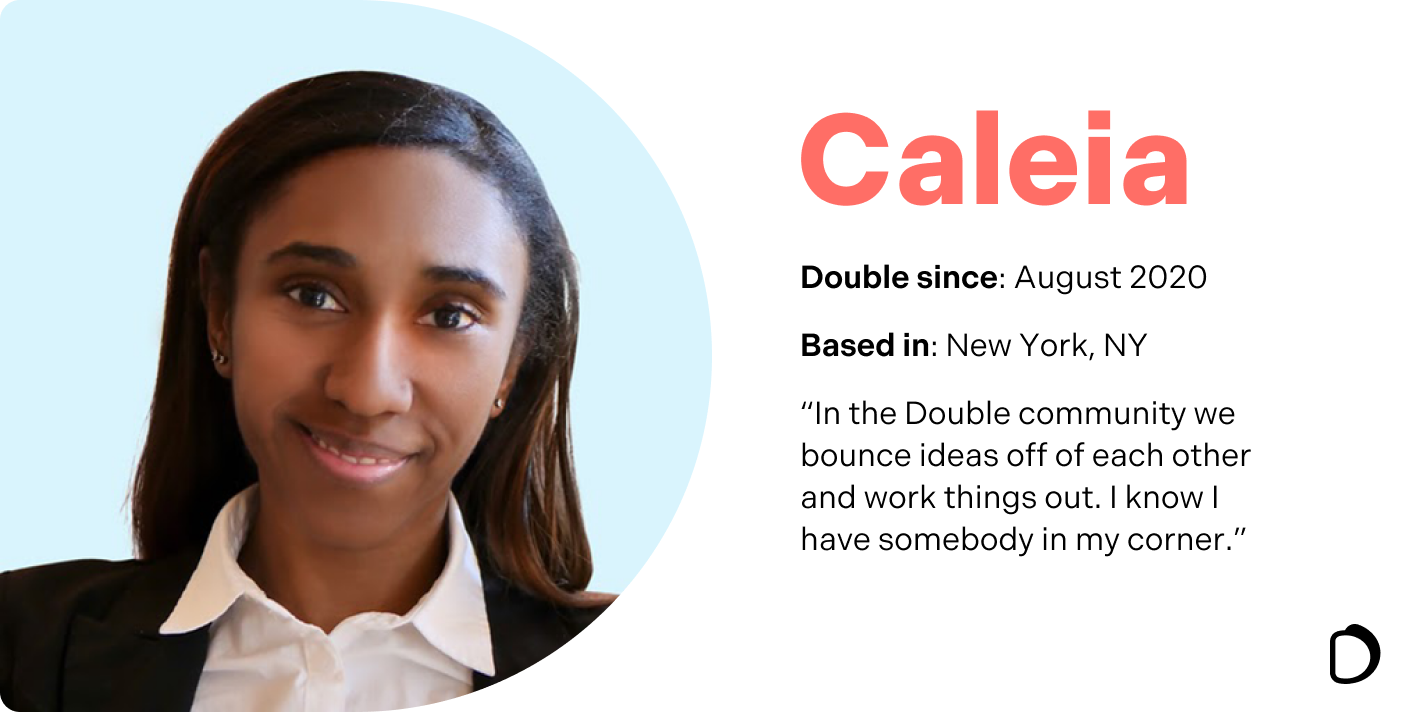 How I got started as an EA: In college I didn’t know what I wanted to do with my life. I got a degree in communications and then worked in retail for 10 years. When I had my daughter, I wanted a grown up job, but it was difficult to break into EA work. I started out as a contract assistant at a broadcasting company, and after six months they brought me on full time supporting the Sr. Executive Producer and Director. I spent the next nine years supporting C-level executives. I knew I wanted to organize people’s lives, and I’m really good at it.

Why I joined Double: Before Double there was a lot of stress crying. It wasn’t until Double that I realized how burnt out I had been. In the Double community we bounce ideas off of each other and work things out. I know I have somebody in my corner.

Biggest EA challenge I’ve solved: I was organizing a holiday party for a company, working on the fly and trying to get everything wrangled so the team was happy. The boss changed the date of the party at the last minute after everything was already booked, so I had to find a new venue that would work for three different offices. A day before the event, I learned that an attendee required a special diet that the venue couldn’t offer. I had to hire a separate food vendor for that person and work with the venue so they’d let us bring in outside food.

Advice for other EAs: As soon as your executive has a request for you, acknowledge that you’re on top of it. They’ll be appreciative to know that you have it handled, and that they don’t have to check in. 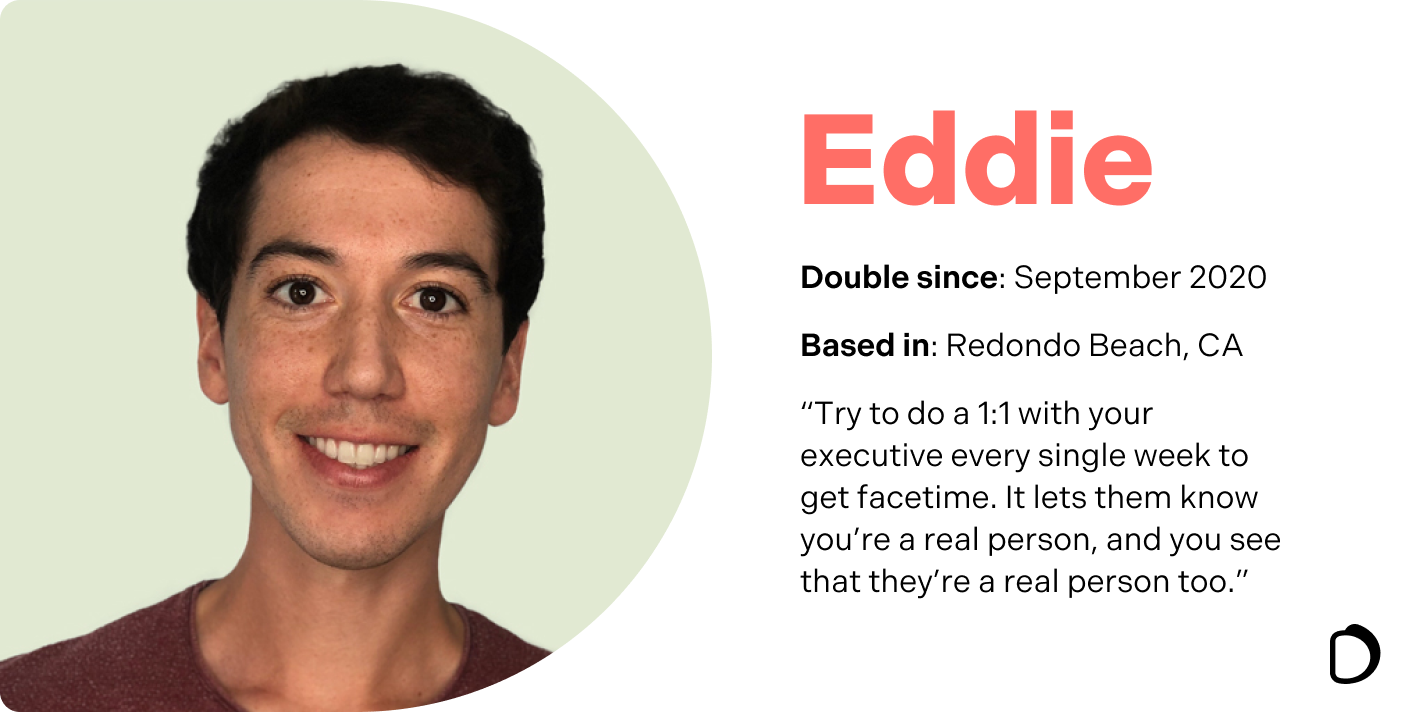 Why I joined Double: I started a podcast and was looking for remote work. Double gives me the freedom and mobility to pursue my own ventures while paying rent.

Biggest EA challenge I’ve solved: I was working with a client from Dubai and he came to Los Angeles for a meeting. He really liked a specific pastrami sandwich from Beverly Hills, and wanted to take some home to share with his family, so I had to find a way to get this sandwich from Beverly Hills to Dubai. I had to organize vacuum pack seals and freezer packs so we could deconstruct this sandwich for the flight home. I’ve had to buy cars and do big things for clients, but nothing matches the pastrami sandwich.

Advice for other EAs: Try to do a 1:1 with your executive every single week to get facetime. Just talking to them is good to have 15 minutes to check in. It lets them know you’re a real person, and you see that they’re a real person too. 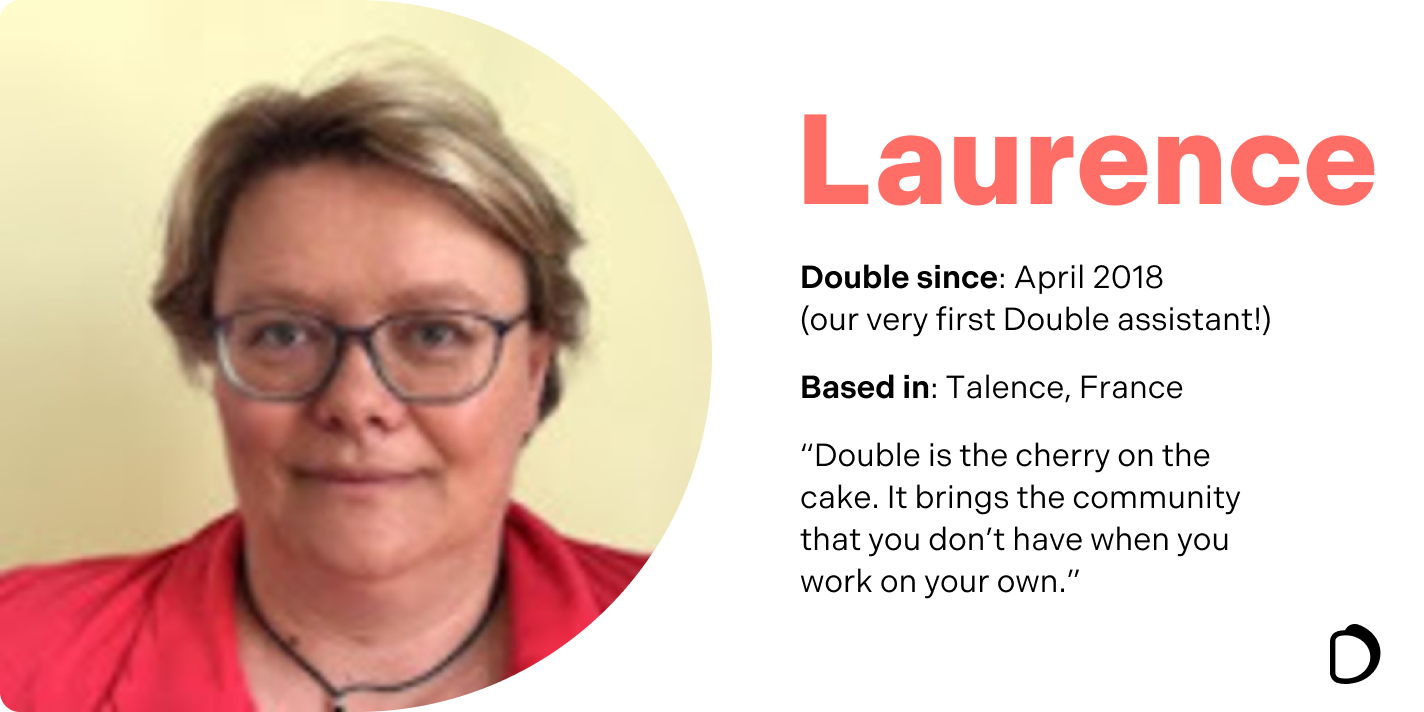 How I got started as an EA: As far as I can remember I’ve loved being in the shade and making sure my team was helped as much as I could, so they can achieve their goals. I studied marketing, but for some reason I didn’t want to be on the front of the scene. After having three kids and not working for three years, I couldn’t imagine being so involved in a job and raising my family. I found a remote work website, filled out my profile, and 48 hours later had my first assignment. I bought a Mac and organized an office in my house, and I’ve been doing remote assistant work for ten years now.

Why I joined Double: One of the first executives I worked with later became an investor in Double. My first discussions with the Double team were about crafting the service, what kinds of tasks need to be done, categorizing tasks, and understanding how I would respond. The team went on a weekend brainstorm and they called me with so many questions! I put my life on the table to show them how I do my work. Double is the cherry on the cake. It brings the community that you don’t have when you work on your own. I don’t miss the office and a coffee machine, but during the day sometimes you need to talk to someone. I go to the Double community and there’s so many nice Slack messages from other people.

Biggest EA challenge I’ve solved: For one executive, I had to arrange his honeymoon in Japan, which was a country I didn’t know much about. The executive’s best friend was also planning to go to Japan around the same time, and I managed to have them meet during their trips. When you know a task is for that person, you want to surprise them a bit and put some emotion into it, like making sure there’s a handwritten note in their hotel on the other side of the world saying “have a lovely holiday.”

Advice for other EAs: Listen a lot. My executives know they can talk to me about everything. Personal life, their fears, coming out of a bad meeting and they can unload about life. I take their hands and tell them it’s going to be okay. When they feel they can trust you, you’ve won. That’s everything. 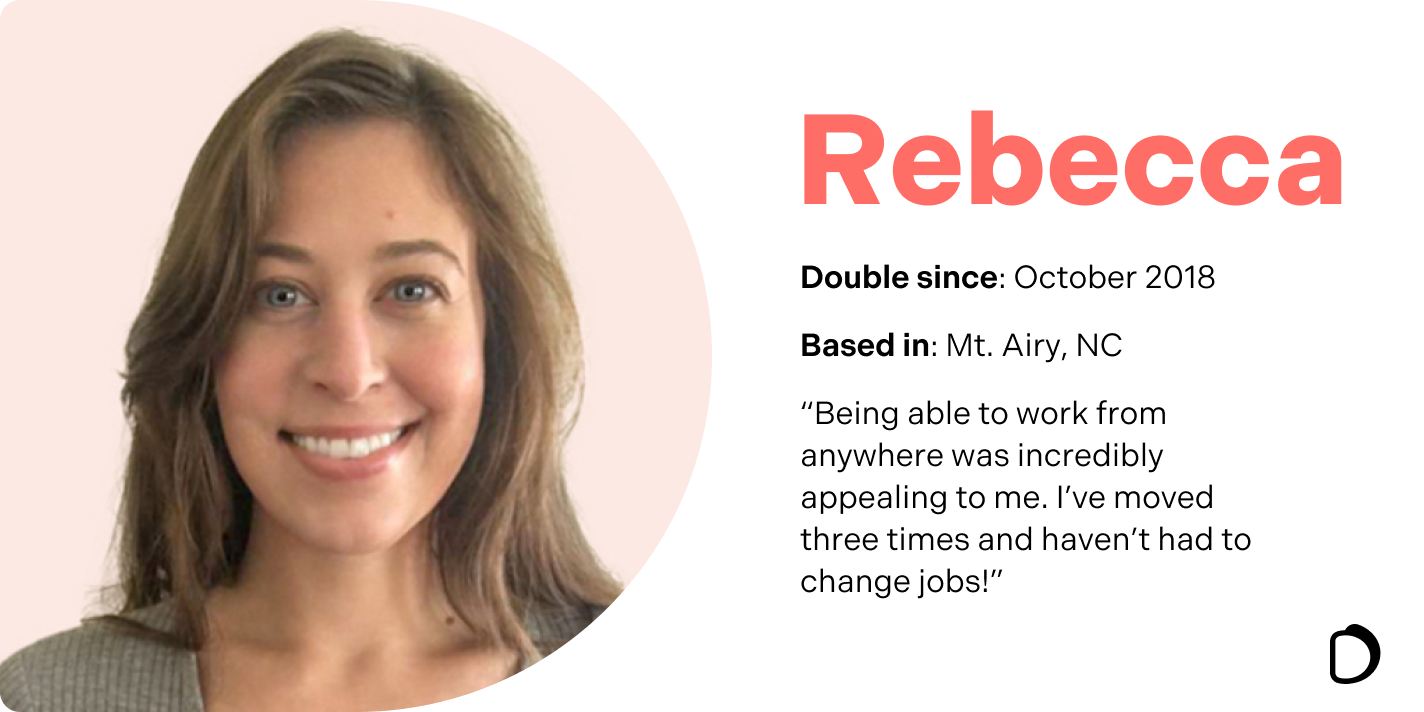 How I got started as an EA: I went to school for fashion merchandising and thought I was going to be in the fashion world, but it felt super cutthroat. I was at a club in New York and met a hair stylist. We became really good friends, and he needed help so I started working for him as an assistant. I was his right hand from the very beginning. Then an ad agency reached out to me and I worked as the EA to their CEO.

Why I joined Double: I wanted a change and had moved to Connecticut. The idea of being able to work from anywhere was incredibly appealing to me. I’ve moved three times and haven’t had to change jobs! I love the idea that you can build a clientele over time, and work with people from all different types of companies.

Biggest EA challenge I’ve solved: I had to plan a trip to China and Japan for an executive, and handle all of the visas and paperwork to make it happen. While my client was in Japan he wanted to get a haircut, but not at just any salon. He wanted to find a hair salon that was also an arcade--I didn’t even know that this existed! I had to get really creative to find an arcade hair salon for him.

Advice for other EAs: Take initiative, and try something out. If your executive doesn’t exactly know what they want, try putting work blocks on their calendar, color coding things, or adding labels to their inbox. 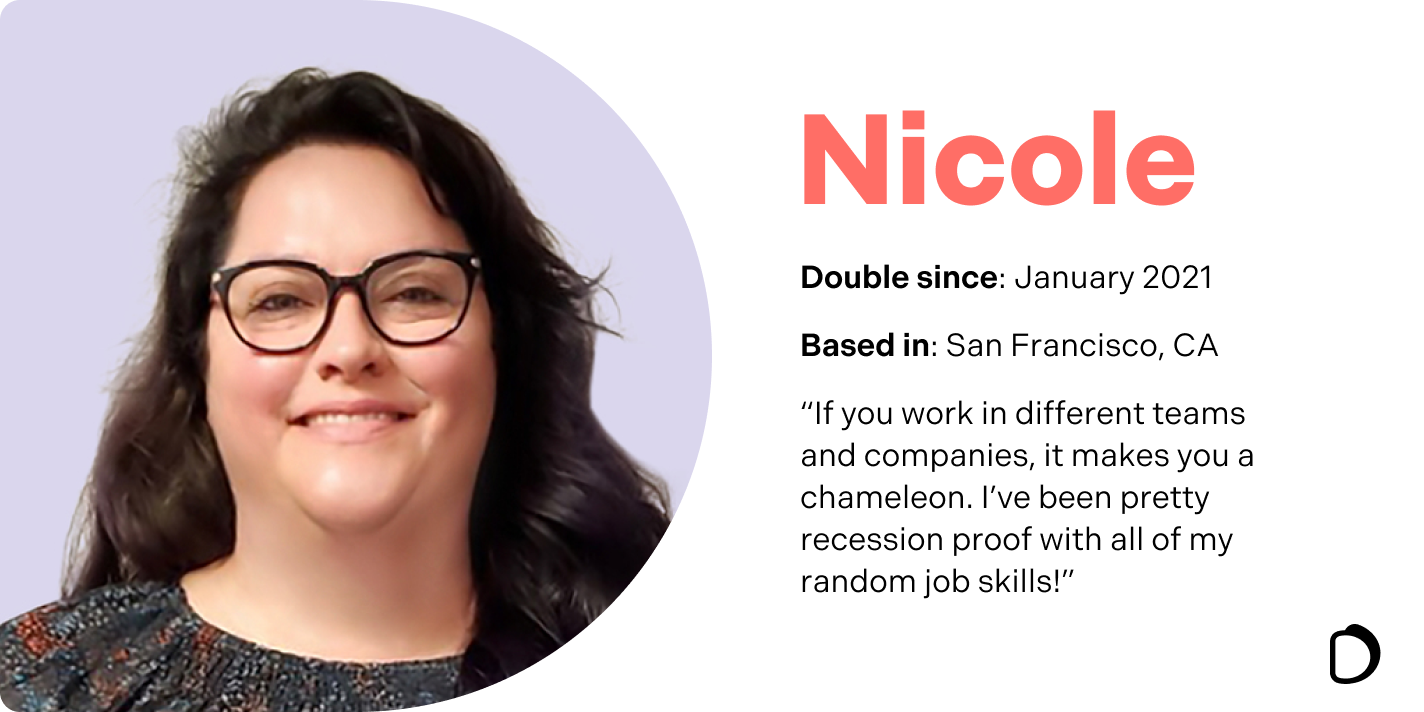 How I got started as an EA: I started out working in music videos and commercials as a production assistant. My job was to hang out with musicians like John Mayer, Pharell, and Jay-Z. We spent so much money on a three minute video, and while I appreciated all of the jobs it provided, I just couldn’t believe it. So I went back to paralegal school, and then started out as an office manager and paralegal for an attorney. After that I worked at a tech company and eventually a VC firm. If you work in different teams and companies, it makes you a chameleon. I’ve been pretty recession proof with all of my random job skills!

Why I joined Double: The owner of a company I was working for decided to move, and I opted to take a paycut to keep my job. I woke up in a panic not able to pay rent. I found Double to help make up the gap from the paycut, but now I’m making four times that! It's only been a few months, but I already don't remember life before Double.

Biggest EA challenge I’ve solved: I play tetris on calendars all day long. I was able to get 10 people from three different companies together and that was huge. I love bringing people together.

Advice for other EAs: There’s nothing I hate more than a missed task. Make sure you have good lists! I like a good old fashioned paper list that I can see and cross off.