While researching about the percentage of males who work as Executive Assistants, the first couple of results show a link to a Reddit post that asks, “Can a male person be an Executive Assistant?” And the answer is: YES, OF COURSE!

Generally, most people seem to agree that females are typically warmer, friendlier and appear more trustworthy in external facing roles. While there is significant debate surrounding the neurological basis for women’s ability to juggle tasks, most can agree that in general women can track, process, and respond to more stimuli at a time than men can - these characteristics make a great assistant, indeed.

I recently collaborated on an article about reaching a milestone at Double by having over 200 EA’s working remotely in the US and Europe; though less than 6% of our Assistant Community identifies as male, this figure is actually above some averages after reviewing the data linked above in detail.

Having been an Executive Assistant myself, I think there is a ton of potential for males to grow and be successful Executive Assistants. When I began my career, I was not aware that this type of role existed, in honesty. I kicked off my career working for one of the Big 4 Accounting Firms and soon realized that the industry was not for me given the skills needed to succeed in the position. By chance, I fell into an EA role at a school where I discovered how interesting this job can be given that no two days really looked the same.

Working side by side with leaders in different departments within an organization led me to learn about many aspects of a business and in doing so I found a career that I truly enjoyed. Currently, I hold a great job thanks to the exposure I got from being an Executive Assistant. Though at times I did get a few surprised faces when I said I was an Executive Assistant (and was even told it was a ladies’ job), it never really bothered me because it was a role that challenged me and brought new opportunities.

I would definitely encourage other men to give it a try; education is a great first step for men who are interested in these roles (take it from my experience!) Given my own professional path, I figured it was time to hear a little more about the male Executive Assistant experience as mine is only one story.

I reached out to some of our male Doubles (Executive Assistants) and asked them to share with me their experience in this industry: 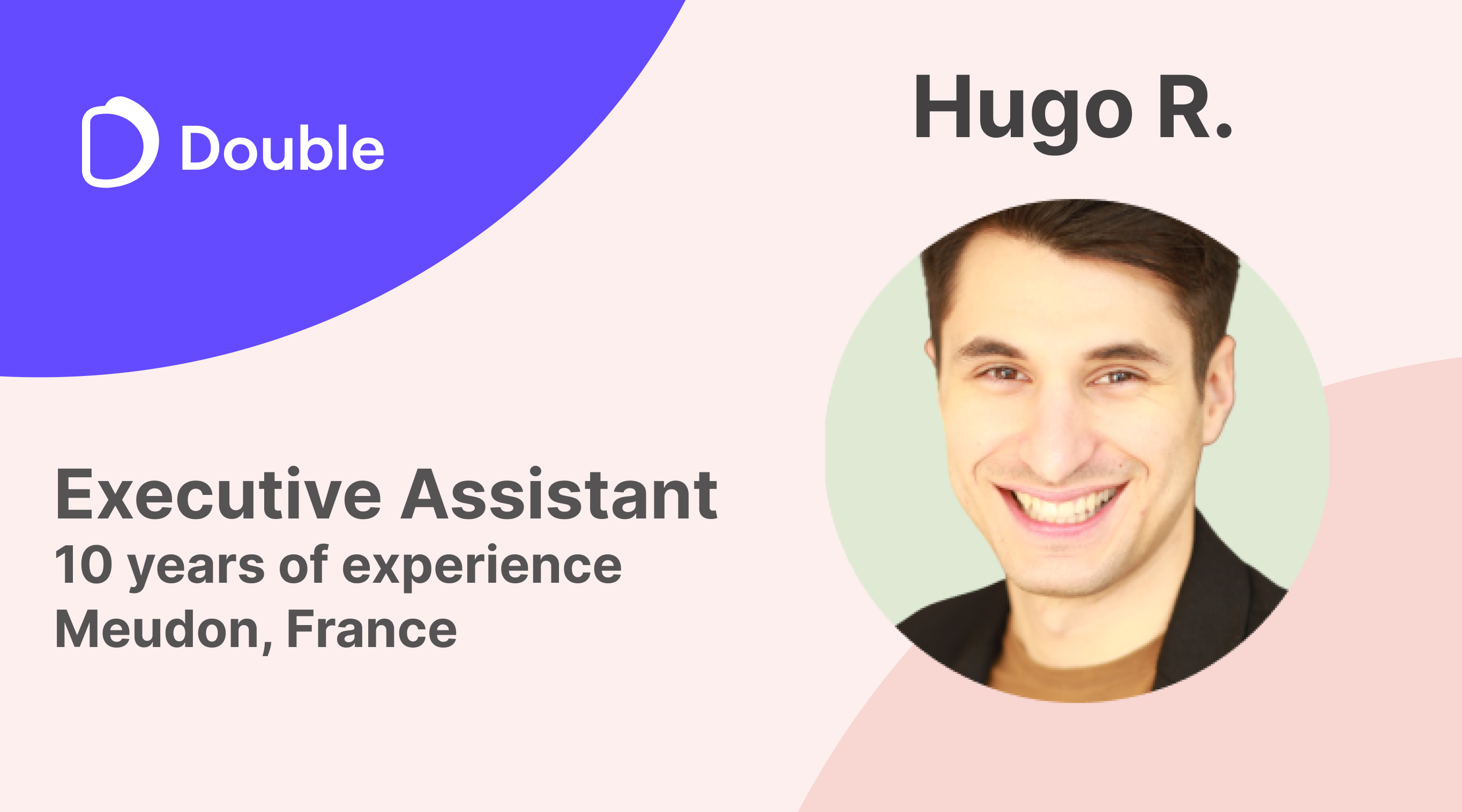 I have always considered that being a man in a traditionally female environment was an asset. During my ten years of experience as an Executive Assistant, I cannot count how many times during interviews the recruiters told me, “We really appreciate for once to have a man applying; it’s rare.”

In my opinion, besides our skills and competencies, being a male is a way to stand out in this type of job. I had some funny experiences in companies where I was the only male assistant (which was the case for almost all but one). For example, in France we have two different words: “assistant” for male and “assistante” for female. I remember that I was receiving emails from the “assistantes” group, and they were always talking feminine. I was totally okay with that and never took it too seriously; we even made jokes about that and it was perfectly fine.

However, it can be unfair if we compare with women that apply for “traditionally male” jobs. In most cases they might be discriminated against. I remember that once a recruiter asked me if I would have any problem working for a female executive. I think this question was really inappropriate and sexist, as it would suggest that a woman could not manage a man, or that a man cannot accept being managed by a woman; I had many female managers throughout my career, and I just love the dynamic that we created with this kind of relationship.

What I enjoy the most about this job is its versatility. We can work in many different types of companies, in various sectors. It is not just a job about administrative tasks; we can also work in events, communication, bookkeeping, and more!

That is the kind of job where you are never bored. I definitely recommend this job to other men if they want to work in an environment where human relationships are very important, the tasks are diverse, interesting, and where every morning is always different from the one before. 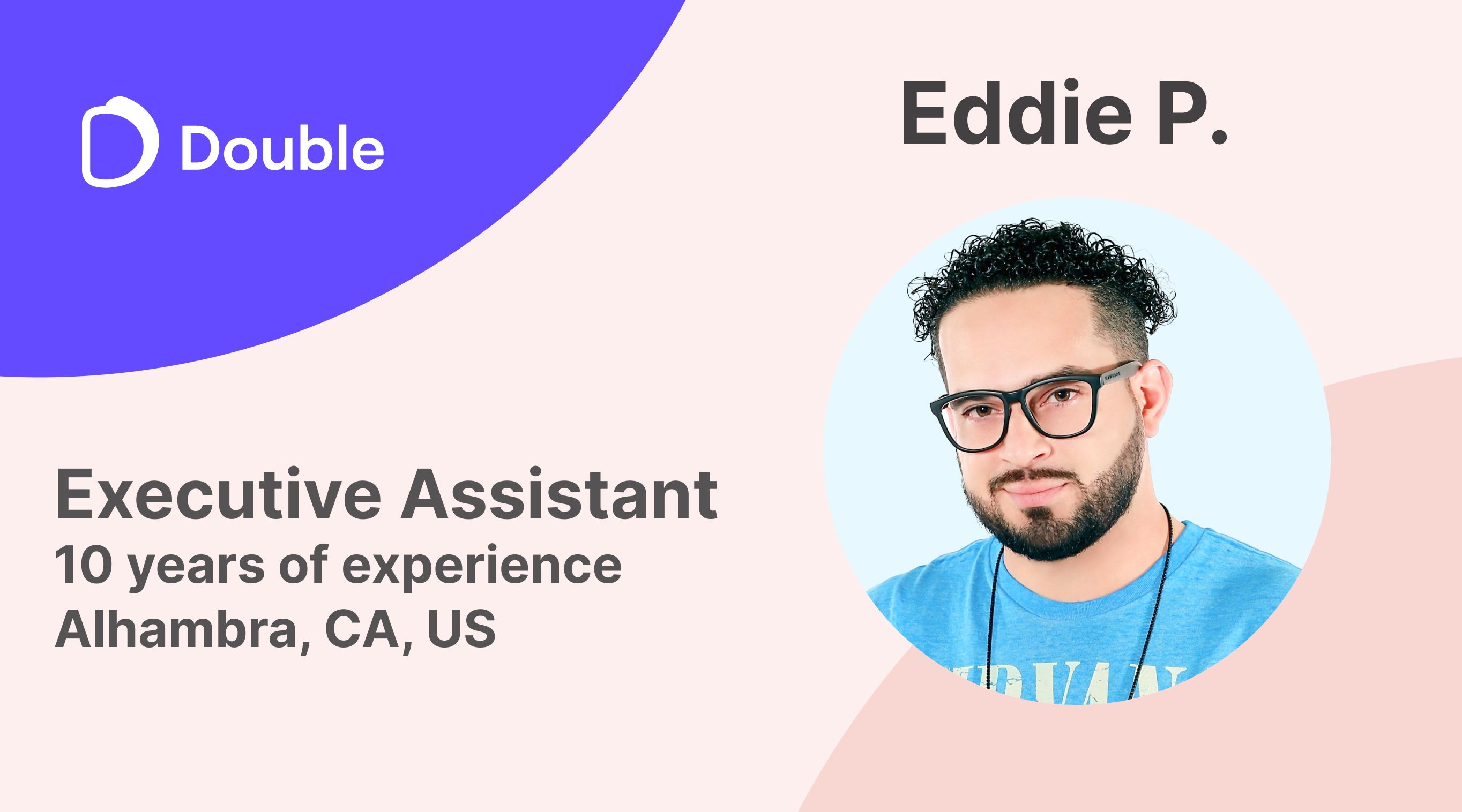 I was introduced to the field of Executive Assistance when I had the opportunity to work with a high profile CEO and President of a non-profit organization where the assistant before me was a woman.

I grew to learn and understand the very unique ability of my Executive and how he got to where he was at. Being involved in meetings with influencers you only hear about in the news was inspiring. Learning communication tactics, unwritten rules, and the delicacy of the work was intriguing and it kept me on my toes. Needless to say, being around Ivy League graduates in itself was uplifting and challenging at the same time.

That journey has brought me to Double where now I am assisting the Co-Founder and CSO of a very successful tech start-up in Silicon Valley. I have been able to apply my skills in a very effective and successful manner. I firmly believe this is not just a job for men or women, but anyone who feels inspired by being surrounded by success. It has made my personal life more organized, and in turn, I consider myself a more successful person than I was before I started my career as an Executive Assistant.

I would encourage anyone who feels called to learn in a different way than business school, a more day to day life applied way of learning, to give Executive Assistant work a chance. It might be that some people shy away from this role because in a sense you are “someone's” assistant; taking calls, managing schedules, creating meetings, and even supporting inbox triage. However, that is usually the easiest part of the tasks!

This job has taught me the essence of time management, prioritizing and how much more you can get done with the time you have in a day. 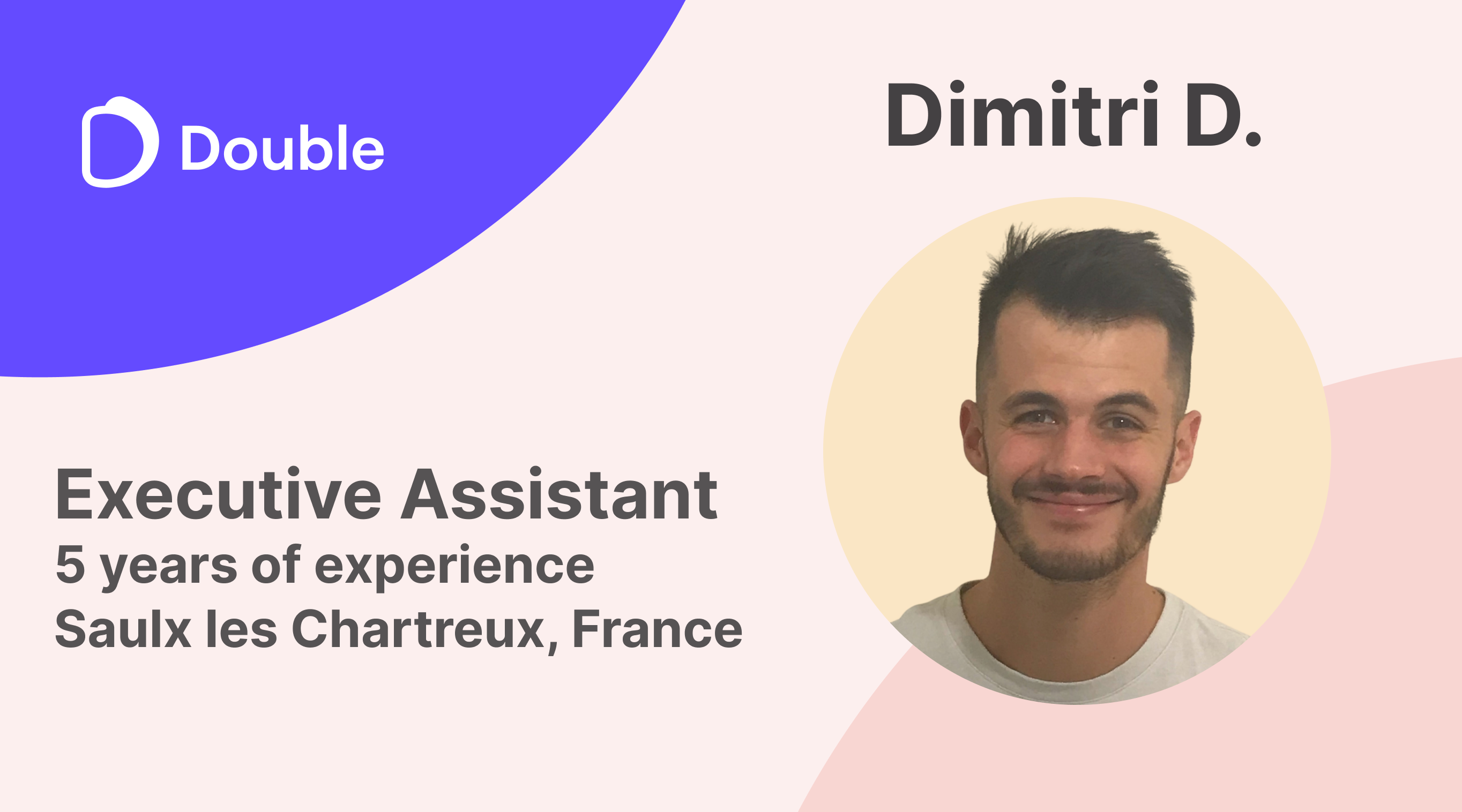 Being an Executive Assistant is challenging, interesting and full of opportunities to learn and develop your skills. Currently, I am working with tech companies; their vision and processes are modern and reduce friction between the employees and the company through the use of technology.

Though the Executive Assistant position could be a women oriented job, strong Executive Assistants need qualities such as the following: a sense of feeling, coordination, and a very good sense of relationship and proactivity so that everyone who does have an Executive Assistant is aware that they do more than just take coffee orders or make photocopies! The administrative tasks are diverse and so is the workforce behind it.

Regardless of your professional background, race, religion, color, national origin, sexual orientation, age, marital status, veteran status, disability status, or gender, if you are a detail-oriented, tech-savvy Administrative Professional, we would love to hear from you; our community is a place to thrive and achieve your goals.

Special thanks to Hugo, Eddie and Dimitri who contributed to this article and to Milini for always being a wonderful editor and colleague.

🎉 Are you ready to become an all-star EA? Take a look at our open roles today!